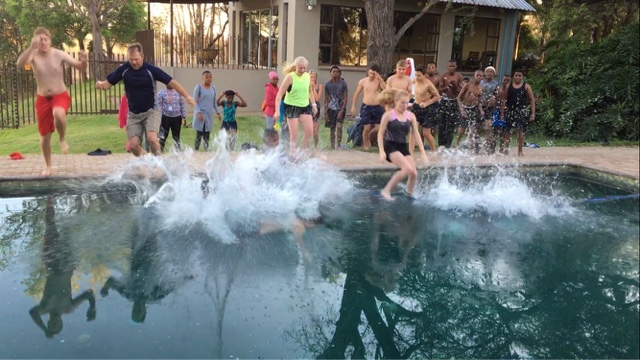 For Thursday morning we challenged the students to a Polar Bear Plunge for bonus points in their team competition. They were to meet at the Lodge 5:30AM for a 1 kilometer (.6 mile) hike down to and up to the river to Robby’s house and his pool. Brick pieces were put in bags with points written on them. A jump into the pool, to the bottom and bring up the bricks. It was quite cool and they were up late so we didn’t expect a full turn out but all 30 students came out. What fun they had jumping and playing in the pool especially that early. Several leaders were persuaded to jump in and the teams got extra points for that also.

Breakfast, a couple sessions and Slip and Slide again warmer but still not even 10:30AM and they were ready for more water time. Back to sessions, lunch, sessions and time to launch the rockets they made. It was fun to see them fly.

After dinner some of the teachers and principals came and several of the combined team had tea to honor them. The rest of the combined team played games with the students – hot potato was a hit! After the tea the teachers, principles and the Academy joined together around a bonfire for sharing, worship and prayer. The students shared the things they learned, enjoyed, or God showed them.

During the day one of the male students by the name of Thepelo accepted Christ. Another female student by the name of Beloved came to christ also. Praise God how He is working!!!! The hunger in the eyes of these young people for what is being offered. Most of them are fully engaged even as tired as they are.

It is Friday and sadly the Leadership Academy is over and the children have gone. So many connections have been made with the students. Many contact infos were exchanged with mentors and leaders. None of the children wanted to leave and I am not quite sure we were ready to see them go. A tree was planted by the students to signify the Academy under which they threw a written note of something they wanted to leave behind.

The team is resting and will get some dinner and relax this evening. Tomorrow we will go to Wild Eden for the day to relax and enjoy the scenery. A night ride may well be in order.
Rodney 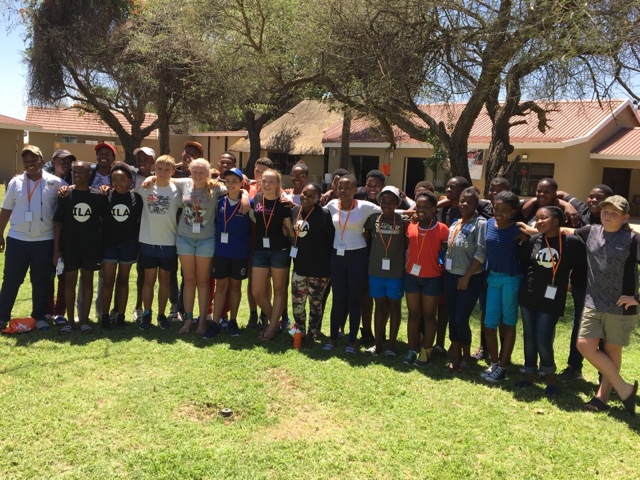